All That Open Water 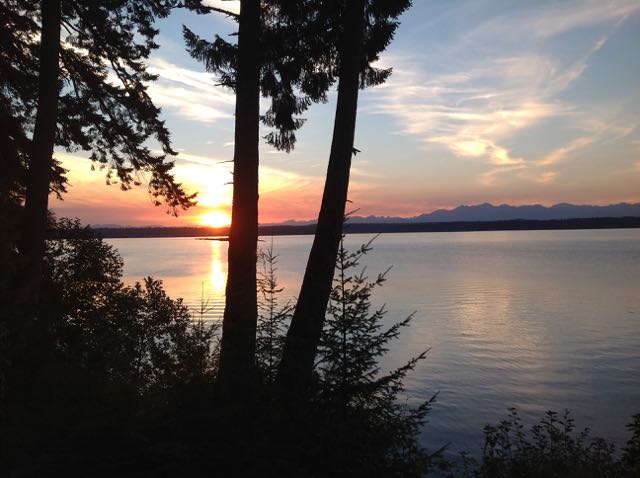 My friend Daniel, whom I’d met at a song gathering I’d led, called to see if he could come visit me.  He felt a lot of music inside of him, and that there were quite possibly some songs that would like to come through him.  He was wondering if I could help him tease them out into the open.  I agreed, and in a few days he drove out from Seattle to my home in Port Townsend, on the Olympic Peninsula in Washington State.

When he arrived, I asked him how his trip had been.  He said he’d been frazzled by the drive from Seattle, a city plagued with horrific traffic, and was still feeling stressed until he turned onto the long floating bridge that carries travelers across the broad expanse of the Hood Canal.  On a clear day, one can see the Olympic Mountains looming majestically across the way, their reflection shimmering on the waters.  Daniel said that as soon as he turned onto the bridge and saw all that open water, something seemed to shift inside him, that suddenly he felt “the peace in the beauty of all that is, that somehow the whole world seemed more round and full and interconnected as one wholeness.”  I said, “Looks like we have a song here.”

I had him improvise some melody to fit his words, and what emerged was lovely.  We didn’t record it, and we moved on to other things.  When he left, I found myself still enchanted by his story, and tried unsuccessfully to remember exactly the tune and words. I decided to just put something together that carried the feeling of what I was still carrying from his visit.  I called Daniel and asked if he minded that I was working with his song, and he assured me that he was glad for the collaboration.  So what has finally emerged is what grew up between us.   He was with us at its first performance.

Being alive in this time of so much despairing information from this troubled world, it is another kind of miracle that the sudden appearance of profound beauty can somehow give us a moment of trust, even knowing, that in the fullness of things, and in the fullness of time, all is well.

When I saw all that open water, something opened in my soul.

I felt the peace in the beauty of all that is,

Reminding me all is One, all is Round, all is Full, all is Well, all is Whole.