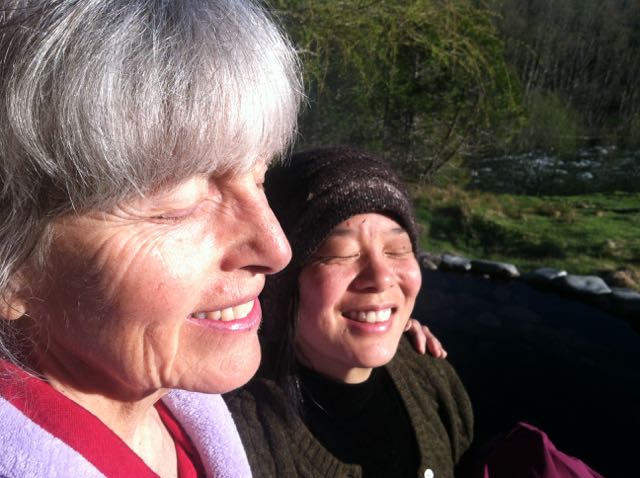 As you may have noticed, I receive much of my inspiration for songs from books, poems and essays by people I admire and in whose work I find eloquent expressions of what I deem as essential  values,  insights, and behaviors for our challenging times.  Often, these insights and behaviors are directed towards areas of my own life that could use at least a reminding if not a flat out “wake up and smell the coffee, Laurence!”  I’ve been finding that if I turn a few choice phrases into a simple song, it helps me stay more aware and accountable to my intention to live a conscious, loving life.

The essay “The Practice of Gracias” by Julia Alvarez, a Vermont writer from the Dominican Republic, that I found in the 2015 September-October issue of Orion magazine, is a prime example of such needed inspiration morphing into a song.  Ms Alvarez tells of meeting a prisoner named Jhonny Rivas in a slit of a cell in la fortaleza, an old fort and dungeon where he’d been held at the time for eight months without a hearing, on a trumped up charge of murdering a witch.  Being a Haitian living in the Dominican Republic, a country, as she says, “not known for kindness toward its neighbor,” he’d actually been framed for organizing for the rights of his fellow Haitian workers against the big Dominican land owners. As Alvarez was led into the depths of the prison, she says it felt like being as close to a circle in hell as she’d ever experienced.  Then as Jhonny greeted her with an embrace and the simple word, “Gracias”, that world was transformed into hospitality and warmth.

They stayed in touch over the course of his imprisonment, and she learned that the other prisoners, both Haitian and Dominican, had asked him to be their chaplain.  She recognized that it was what she saw as his “practice of gracias” that allowed him to be of such support and encouragement to others.  His gratitude was not the sort that’s about talking yourself into seeing the glass as half full.  It’s the kind you can practice even when the glass is completely empty, or there’s no glass at all.  There is just “being here now.”  In the presence of his capacity to flood the immediate world with sweetness and light with the simple word “Gracias” she understood why in Spanish the word for expressing gratitude is also the word for grace.

Alvarez saw this gratitude as the kind that allows you to live in a bigger world, where your life is not just your own, but is experienced as part of an interconnected root system of family, friends, strangers, nature, history, everything that has made you who you are and brought you to this moment.  It reminded her of the advice Henry James offered to aspiring writers; “Be the one on whom nothing is lost.”  Then she says, “You will gain the whole world, and a soul besides.”

When I read those words, I felt a song wanting to be born.  It came through quite quickly, and when I introduce this song when leading song circles, I mention my understanding gained from more than one teacher that our soul is the carrier of our gift, the medicine we came to deliver in this world.  And it struck me how critical is this “practice of gracias” for charging our soul with the medium for such delivery.

When I teach the song, I get folks just singing the basic phrase together, then divide the group in two and start them singing the two part round.  Once that’s established, I stop the singing and teach the bass part to lower voices.  I then re-up the round again and lead the lower underlayment into the blend.  Finally, I teach the higher voices the “gracias” part.  A few high sopranos on that part can make the whole song really soar.

Part One:  Round
Be the one on whom nothing is lost

And you will gain the whole world and a soul besides.

Part Two:
Be the one on whom nothing is lost.

Be the one on whom nothing is lost.